In the past, everyone who wanted to have a cookout needed access to a gas grill, which can be big, costly, and even dangerous at times.

Gas grills have a time and a place, but they simply aren’t a practical choice for everyone who wants to grill outdoors.

There are some living arrangements, such as apartments or in HOA complexes, where they forbid gas grills due to space and safety considerations.

Even if people living in these areas wanted to, they would not be able to use a gas or charcoal grill.

These days, though, there is another great option for you: electric grills.

Electric grills offer a lot of versatility and convenience, and they are also generally considered to be safer to use than their gas or charcoal counterparts.

For that reason, HOAs and apartment complexes often allow these grills to be used in the outdoor space, so they can be a great way to get that grilling vibe going.

In today’s Weber Q1400 Electric Grill review, we will take a closer look at one of the most popular, small-sized electric grills for outdoor grilling.

Through this, you should have a better idea if this is the type of grill you are looking for or if something else would be a better fit.

The Weber Q1400 Electric Grill offers a fantastic balance of cost, size, and practicality for those looking for an outdoor grilling solution. 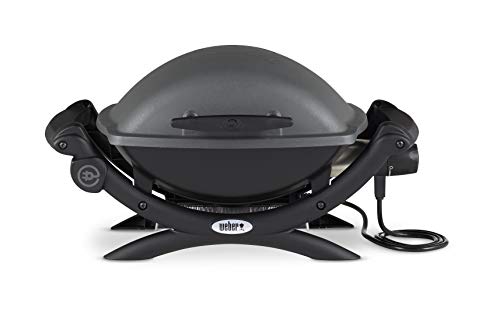 Who Is This Product For?

This electric grill option is great for anyone looking for a small grill to be able to use in their outdoor space, and they want something that is going to be safe and straightforward to use.

Electric grills are very versatile, and they’re a type of cook surface that is easy to learn to use for those who want the fun of a BBQ without the stress or inconvenience of using a gas grill.

In particular, this very small model is good for those who want to use a grill on the balcony or in a tiny backyard space; it doesn’t take up much room, so you can use it with ease.

The Weber Q1400 Electric Grill is even good for situations where you want to bring extra friends over, but you don’t want to feel cramped; sure, it might take a little longer to cook on a small grill, but the benefits pay off.

This grill is small enough that it could be used in an indoor space such as a garage as long as you are using proper ventilation, so it is an excellent choice for those who want to have this type of option available to them when using their electric grill.

The Weber Q1400 Electric Grill comes with the electric grill itself as well as a six-foot-long cable extension cord. This cord is also grounded so that you can safely use the grill.

Overview of the Features

To get to know the Weber Q1400, let’s break down the features that it offers.

If you are at all familiar with the Weber Q2400 model, it is worth mentioning that the Q1400 is a smaller version of the same grill, so you might notice some similarities.

The Q1400 is a compact outdoor electric grill that has a cooking surface of around 189 square inches, which should be large enough to cook a meal for two people if you want to cook some sides and meat.

The grill can fit around six hamburgers on it, so it is still a good size for having a small barbecue with friends, and you can always cook another round of hamburgers after the first round without any big problems.

The Q1400 has a 1560-watt electric heating element, which is the same element that powers Weber’s larger grills, so you can be sure that it is powerful enough to help the cooking surface heat quickly.

To turn this grill on, you simply need to plug it in and turn the appropriate dial for it to start heating up. 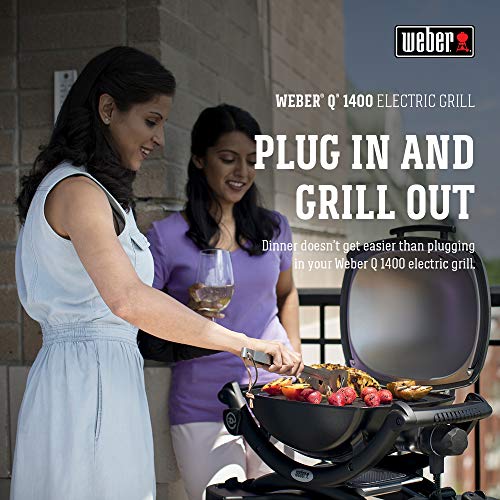 This grill has porcelain-enameled cast-iron cooking grates as well as a cast aluminum lid and body.

Weber’s parts have been made in the USA.

Their products are also known for having some of the best quality around.

One of the main reasons people find their mid-range products to be worth the extra pennies is that they are durable, and the value of a grill lasting for many years can really pay off in the end.

The Weber Q1400 Electric Grill has a removable grease catch pan, which means that drippings from whatever you are grilling are caught and diverted to the catch pan rather than being allowed to hit the heating element.

Though not included with the base grill, there are many grilling accessories from Weber that you can use to make your grilling experience even more enjoyable.

From grill plates to handles to a movable cart, all of these items are available in sizes that fit the Weber Q1400 Electric Grill.

As mentioned, using an electric grill is a bit different than using a gas grill.

If you’ve never used an electric grill before, you will want to consider that before you grill the first time so that you don’t end up accidentally cooking your next great meal wrong.

Don’t worry too much, though, since using an electric grill properly is not difficult to learn.

The first thing that you always want to do before you start using a new appliance is to check out the user manual since it can provide a lot of insight into how to use the item correctly.

Once you’ve become familiar with the electric grill you will use and what features it has, you can move on to grilling.

Electric grills like the Weber Q1400 typically need to have some type of oil on them, so spray your cooktop with a bit of oil before you plug it in.

You can use any oil, but some of the favorites of experienced electric grill users are avocado oil, canola oil, and olive oil.

We recommend that you use a spray form of oil products since these are the easiest kinds of oil to use when you are dealing with a cooktop.

That said, you can directly oil the surface, as well.

Next, you’ll want to give your electric grill some time to preheat so that you are ready to cook and to make sure you reach the required temperature for cooking your food.

How long this takes varies on the power of your grill and whether or not it has a lid.

When it comes to the Weber Q1400 Electric Grill, it can take up to 20 minutes to preheat if you want to cook something at a high temperature.

You must pay attention to how the temperature is controlled on your grill if it doesn’t have a thermometer; most people start with a temperature of around 400 degrees Fahrenheit to cook burgers.

Once the grill is preheated, you’ll be ready to start grilling, and this is done just the same as on any other grill.

You may notice while cooking that the temperature manages itself a bit differently.

That is because an electric grill must constantly reheat as it loses heat to the item cooking and environment while gas grills have a consistent temperature at all times.

The best way to clean your electric grill is to turn it off, and then wait for 10 minutes until it is still warm but not dangerous to touch.

Use a rubber spatula or another non-abrasive device to wipe off food debris from the cooking element, and then clean it off with a sponge.

Dishwasher-safe removable parts can be removed and cleaned on their own, but you cannot submerge in water the heating and cooking elements due to the electrical components inside.

If the Q1400 from Weber is not the right electric grill for you, don’t despair since there are many other options on the market.

The first alternative that you may want to consider is the Q2400, also made by Weber.

This electric grill has a very similar set of features, but it has a larger cooking surface and a more powerful heating element. 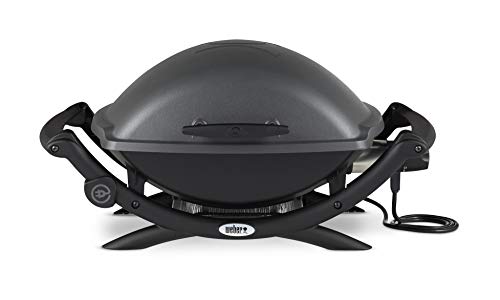 If you want to try something intended for indoor use, the Zojirushi EB-CC15 is a great option.

It has an easy-to-clean surface, value price, and other interesting features to try out for yourself. 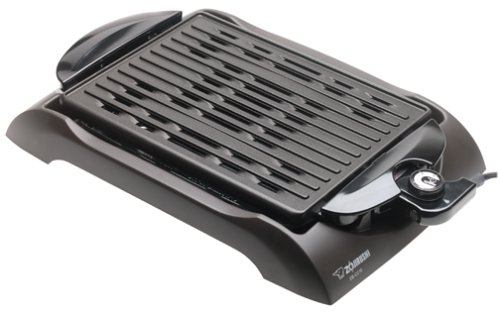 Has this Weber Q1400 Electric Grill review made your mind up about which electric grill you want to try?

This grill has a lot of power in a little package, and its priced very reasonably if you are okay with something small to do some grilling.

If you do prefer something bigger, remember that you can get a very similar grill in a bigger size with the Weber Q2400 grill.

No matter what grill you decide on, get ready to feel the thrill of electric grilling!

Get Your Electric Grills FREE Guide

We will never send you spam. By signing up for this you agree with our privacy policy and to receive regular updates via email in regards to industry news and promotions

Get your Electric Gril FREE Guide

We will never send you spam. By signing up for this you agree with our privacy policy and to receive regular updates via email in regards to industry news and promotions